Two fishermen survived 24 days lost at sea before being rescued by a cargo boat off the coast of Guerrero, Southern Mexico.

Daniel Guerrero Martinez, 42, and his son Isaias, 18, reported that they survived on a diet of raw fish. “We drank the blood of turtles and ate the meat, and we caught small fish and sharks” said Martinez. The pair were rushed to hospital in Acupulco for dehydration treatment but were released yesterday. After an 18-hour car journey they 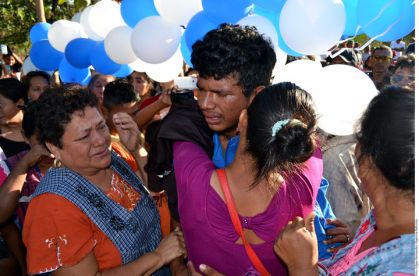 made a triumphant return to their hometown in Chiapas state.

The entire community came out into the streets to greet them for a party with a mariachi band and fireworks. Locals welcomed them with a hug and formed lines to take photos at their side. “I never lost hope of surviving, I put myself in God’s hands,” said Martinez. “I am happy, content. I don’t have words to thank you. It’s beautiful that the town welcomes us like this.” Father and son have both decided to change jobs. “We promised that if we got out alive, we’d never return to the sea,” Martinez said. The pair set off from the town of Costa Azul in Chiapas on December 28 last year but they were pushed out into the ocean by stormy weather.

The story echoes that of another fisherman, Jose Salvador Alvarengo, who departed from the same village in December 2012 and claims to have survived 13 months after washing up on a tiny island in the North Pacific Ocean. Skeptics have questioned the veracity of the story, yet it is difficult to imagine another explanation for Alvarengo and his boat’s appearance on the island, which is 6,200 miles away from the place he was last seen. His lawyers report that he has passed lie detector tests when asked about the journey.