A quick glance through the magazine stands or a minute watching the most popular channel, Televisa, should be enough to convince anyone that sexism still abounds in Mexican media.

Women are almost exclusively dressed in tight clothes and heels. They smile and pout from the glossy pages of magazines. On television, they invariably play a supportive role, cheerfully laughing at the jokes of male co-hosts. Even news coverage rarely features female “experts.” Women mostly appear in the “voice on the street” role, where “normal” people give their reactions to events beyond their control.

Yet this limited and discriminatory presentation has actually helped pushed a generation of women reporters to the forefront of Mexico’s independent journalism movement. Carmen Aristegui, Lydia Cacho and Sanjuana Martinez have become household names in a country that has staged a very public conflict over government control of the press.

Aristegui, Mexico’s most famous radio broadcaster, took on the highest office of the land when she reported that President Enrique Peña Nieto lived in a house provided by a major government contractor. Lydia Cacho published “The Demons of Eden,” a book alleging a prominent business leader had connections to a paedophile ring. Sanjuana Martinez reported critically on a judge after she ordered a raid on a domestic violence charity that removed two children from the care of their mother and returned them to their abusive father.

Yet the women journalists fronting the campaign for press independence have paid a heavy price for speaking out.

Aristegui was fired by her radio station shortly after she revealed the potential “conflict of interest” between the president’s personal and political life.

For other women journalists, standing up to the powerful has come at an even greater cost.

In 1999, Lydia Cacho was raped and had several bones broken by a man in a bus station bathroom. She has always believed the attack was carried out as a retaliation for her reporting. In 2005, she was approached by several police officers in Cancun. Cacho was forced into a van and taken on a terrifying 20-hour drive to a Puebla jail. During the trip, she was sexually violated by police and threatened with a gun, before finally being released on bail. A tape later emerged of a conversation between a businessman and the governor of Puebla, in which they agreed to have Cacho attacked and raped for her investigations.

In 2012, Sanjuana Martinez was in the process of divorcing her violent husband. Under the pretext that she owed the state a small fine, armed police descended on her home in Nuevo León.

“Eight patrols arrived at my house. The scaled the walls, they smashed open the locks and broke the door, wearing masks and waving big guns in front of my children,” Martinez tells The Mexican Labyrinth. “It was a raid carried out without any search warrant… I  was violently arrested for an administrative error.” 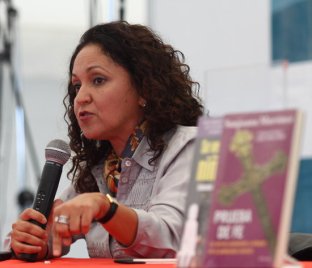 The deployment of armed police is almost unheard of in civil cases, and the judge who ordered the raid was already familiar with Martinez, having been the subject of her critical reporting in 2008. Martinez was held for 24 hours before she was finally released.

While not all violence against female journalists is perpetrated by the state, authorities have systematically ignored the escalating problem.

The Communication and Information on Women Organization (Cimac) documented 184 cases of violence against women journalists between 2002 and 2013, representing a more than 2,200 percent increase, while attacks against male journalists increased by 276 percent.

Of these incidents, 11 were cases of femicide, a statistic that reminds us that Mexico is still one the most dangerous places for journalists in the world.

In February, crime reporter Anabel Flores Salazar was tortured and murdered in Veracruz, a state that is considered one of the riskiest places in the world to be a journalist.

Yet the strategy of sustained repression and violence has in many ways backfired. The conflict with Aristegui was a major turning point in Peña Nieto’s administration. It sparked widespread public indignation and suggested the president’s personal involvement in the repressive tactics his Institutional Revolutionary Party (PRI) had used to dominate Mexico for more than 70 years. While Aristegui was given a hero’s welcome at Guadalajara’s International Book Fair, Peña Nieto’s approval ratings took a downturn. After the scandal, just 27 percent of Mexicans trusted the president to tackle corruption, down 15 points from the year before.

Similarly, the police repression of Cacho and Martinez drew international attention to the freedom of expression and impunity crisis in Mexico. Their own high-profile battles with the powerful helped expose the shortcomings of the Mexican government.

Martinez adamantly maintains a clear separation between journalism and activism. “For me journalism is the most important thing… it is very important that I carry on reporting, writing and investigating.”

Yet she also says that the violence directed against journalists has had a unifying effect on the community, transforming them into powerful campaigners in their own right.

“In the case of the killing of reporters, I think it has converted all of us into defenders of each other. Our colleagues have been executed, disappeared, and cruelly murdered… 90 percent of the cases have not been resolved and this impunity obliges us to raise our voices and denounce the murders.”