“Peña should go! Pepe should stay!” was the chant rising from the crowd of about 500 students clustered outside the University of Guadalajara’s Salvador Allende assembly hall. The mostly young audience had gathered on a cool Saturday evening to await the arrival ofa 79-year-old head of state. 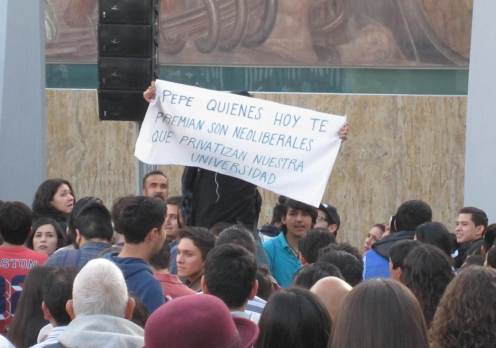 The man they were there to see is the President of Uruguay, Jose “Pepe” Mujica, who was in town to collect the “Lionheart award” from the Guadalajara Student Federation, a prize previously given to the famous journalist Carmen Aristegui, and the priest and activist Alejandro Solalinde, among others.

There was a boisterous atmosphere, and the introductory speech given by Rector Tonatiuh Bravo Padilla was greeted by a chorus of boos. Padilla praised the state of democracy in Mexico, while the crowd outside the hall chanted “liar” in unison.

Alberto Galarza, the President of the Student Federation (FEU) fared little better. He gave a florid and emotionalized speech, which the Uruguayan leader, projected onto the big-screen outside, was shown to be listening to with a displeased expression.

Uruguay President José Mujica with Alberto Galarza, the President of the Student Federation (FEU), to his right and Rector Tonatiuh Bravo Padilla, to his left.

He even opened his own discourse with a gentle rebuke: “What a tragedy it would be if I was younger man and I took all this eulogizing seriously,” he said, tapping Galarza, who was seated at his side, on the arm.

“I can see in all the applause and the clamor that I’m not being seen as I truly am,” he declared, modestly. “Yet I can also detect a hope and a necessity to believe. Because to live, we must believe in something.”

Mujica went on to give an impassioned speech, peppered with jokes and Uruguayan slang, in which he lambasted consumerism and inequality for 45-minutes without glancing at any notes.

He listed his priorities: love, children, a group of friends; and criticized a work culture that draws people away from what is important in life. In the modern world: “you don’t have time to be friends with your own children.”

He spoke about the true value of money: “When you buy something” he declared, in his gravelly tone, “you don’t buy it with your money, you buy it with the time from your own life that you spent working to get that money!”

This obsessive pursuit of money is something he believes has tainted politics. Yet Mujica was careful not to condemn the world of business: “Each to his own. If you’re after dollars, by all means go into business, I applaud you, and if it goes well, you can pay your taxes.”

Public service however, “is not a profession, it’s a devotion,” and politicians should live accordingly.

The audience of Mexican students, listening with rapt attention, was of course aware of the relevance of all this to their own society. The Mexican President Enrique Peña Nieto has recently been embroiled in a scandal related to a number of properties used by him and his wife that are registered in the name of a firm that had received public contracts during his time as Mexico State governor. Mujica made no reference to the Mexican leader, but the significance of his words cannot have been lost:

“If I have an illness or a heart attack, what I need is a good cardiologist. If you need to govern public institutions, you need people that are not affected by the interests of these institutions.” If this is not the case: “democracy is kidnapped.”

Unlike Peña Nieto and his wife, with their lavish properties, Mujica refused to live in the presidential palace, opting instead to stay in his little bungalow.

The palace “is a relic of the old culture of monarchism,” and not a suitable dwelling for the leader of a democratic republic. “A president must live like the majority in his country, not like the minority,” Mujica said.

In contrast to Angelica Rivera, the First Lady, who announced that she declared $10 million to the tax authorities in 2010, Mujica collects an annual salary of $150,000 and gives 90% to charity. He dresses simply and drives a battered old Volkswagen Beetle.

News of his upcoming visit was greeted with excitement by Mexicans on social media. “We wish we had someone like him governing us,” tweeted Daniela Becerra. “Let’s switch presidents! Wait no, that would be unfair on Uruguay!” said Fernando Omar.

So why does the president of a distant South American country attract such a following? Whilst it’s largely due to his unconventional personality, there are real indications that there is substance behind the style.

Uruguay under Mujica has experienced robust economic growth, and the gap between rich and poor has declined, making it the most equal country in Latin America. At the same time, neoliberal policies in Mexico have devalued the peso and reductions in inequality have been relatively modest.

Whilst Mexico has suffered the effects of prohibition, and the financial empowerment of drug traffickers, Uruguay has made marijuana legal in an effort to curb black market profits and free up police resources.

Of course, Uruguay has a tiny population, smaller than that of Guadalajara. This makes it more nimble, manageable, and perhaps more open to experimental policy making.

Mujica’s international reputation, moreover, is not matched by his approval rating at home, which at 47%, is better than most of his predecessors, but nothing spectacular.

Yet in Mexico, the Uruguayan leader received a hero’s welcome, adored by the very same protestors that have had enough of Peña Nieto and long for a president who comes from outside of the establishment.

Mujica didn’t explicitly mention the cause of Mexico’s recent protests: the disappeared students of Ayotzinapa, but he did encourage citizens who are calling for an end to state violence:

“The only people who can be defeated are the ones that give up. You can fall one, two, three, or fifty times, but it’s always worth getting up again.”