The preachers who claim they can make you wealthy

“I came here to find healing for my arthritis,” said Valeria, sitting on the pew of the Universal Church of the Kingdom of God, known as Pare de sufrir, or stop suffering. “I was raised Catholic, but I came to know God in a different way here.”

The pastor, a Mexican national who had never lived abroad, addressed the congregation in a distinctive Brazilian accent. He promised healing to the faithful, and told them God wanted them wealthy. After the service, a line was formed. Members of the congregation filed to the front to have bottles of water blessed and made holy. Some brought photos of their family, rubbing them in the “Dead Sea salt” heaped across the floor.

Outside the church, a poster advertised the Monday service. “A prayer for prosperity,” was the theme, printed in bold alongside pictures of a sports car, a stack of money, and a flash apartment.

Pare de sufrir is one of a new breed of evangelical churches preaching prosperity gospel, a theology that says that success and health are a mark of divine favor. According to these beliefs, the promises of the gospel are for the here and now. 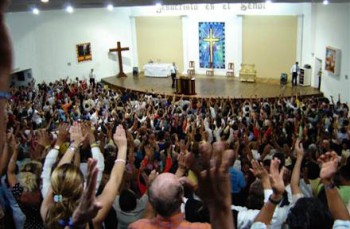 The church originates from Brazil, but its central theology has diverse influences. It is a message espoused in the mega churches of the United States, by polished preachers like Joel Osteen and Creflo Dollar.

It is also deeply rooted in homegrown Mexican movements, such as The Christian Friendship Church.

“When I received the Holy Spirit, I was instantly empowered,” said Javier Gomez Rubio, Director of The Christian Friendship Church. “Did you know that God gives us the power to make money?”

To many, this is an appealing and comforting message. Yet it is also a controversial one.

Church leaders are often criticized for abusing the faith of their followers by enriching themselves through the donations of their (often marginalized and impoverished) parishioners. Central to their message is the “Law of Compensation,” which teaches that when Christians give generously, God returns the favor.

“There is no place in Holy Scriptures that guarantees wealth or health,” said Reverend Kenton M. Wood, an evangelical pastor working in Zapopan. “There is nothing wrong with being wealthy or healthy, but it’s not guaranteed. Usually those who preach this false gospel gain wealth by manipulating their congregations into giving in order to be blessed by God.”

Certainly, some aspects of the Pare de sufrir movement smack of fraud. The “Dead Sea salt” has been found to be indistinguishable from table salt. The miracles performed during services have likewise been questioned by skeptics. Most significantly, the church’s Brazilian founder, Edir Macedo, has been accused of siphoning off billions of dollars in donations. 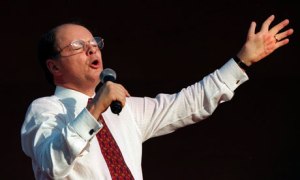 Gabriel Guzman is a former pastor at Pare de sufrir who now campaigns against the “commercialization of faith.” He objects to his old church’s theology because it involves the Christian using God as a mere tool to obtain blessings.

“In this configuration, the church is no longer a place of community and worship, but a place of simple solution.”

He has further revelations about the movement’s structure. “The church sets monthly goals for donations. If the pastors achieve them, they are given different rewards in addition to their salary. Sometimes they are sent to a larger church, which increases their own revenue, sometimes they are given a better car or are sent on expensive trips. If they fail to achieve their goals, they are embarrassed in front of the other pastors or are sent to a smaller church. In short, it is a company camouflaged as a church.”

Pare de sufrir refused to the respond to these claims. What is certain is that the church is part of a broader movement teaching that material reality, our health and wealth, can be used to measure immaterial faith. It is by definition, a materialistic theology.

Gordon Gekko, the central character of “Wall Street” famously claimed that “greed is good.” Yet with its corruption and drug war, Mexico is not a place that proves it. So what effect could the rising influence of this theology have on a society already weighed down by the effects of materialism and inequality?

“The theology scorns poverty and promotes a love of money,” said Dr. Renee de la Torre, a local academic who specializes in religion.

“While many religions, including Catholicism, teach that material poverty aids spiritual wealth, these congregations promote the idea of earthly success. Of course, eternal salvation remains a goal but they want to achieve it without sacrificing the satisfactions of this material world.”

Yet isn’t this desire for the good life entirely natural? Doesn’t the church promote hope and ambition? Doesn’t it offer a practical message of hard work, as well abstinence from drugs and alcohol, two factors that further entrench the poor in cycles of deprivation? 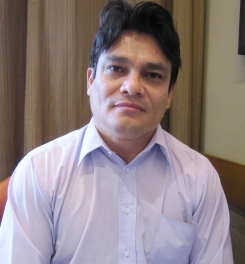 Pastor Sergio Soto certainly believes so. A prosperity preacher who came to Guadalajara from Sinaloa as part of an evangelical organization that splintered due to theological differences, he was forced to “go it alone” and establish his own church, Faith and Power. He preaches on weekends in Guadalajara, but works as a chartered accountant during the week.

For him, there is no contradiction between wealth and Christianity. “Jesus was not poor. The kings of the earth brought him gifts of gold, incense and myrrh when he was a baby. He had a treasurer. He owned a boat. He could multiply food.”

Yet Pastor Soto is no fan of Pare de sufrir, “Many have manipulated this gospel for their own purposes. God knows our hearts and it is about the heart of the giver. It is a message of love. Miracles and health cannot be bought.”