A menagerie of mythical Mexican creatures

Mexican folklore, mythology and local gossip are full of cryptids: animals or plants whose existence has been suggested but has not been scientifically proven. Many of them have their origins in Aztec legend, still more were created when the Spanish arrived and some appeared in more recent times.

The Chupacabra, literally “goat-sucker,” has been spotted across the Americas, with frequent and numerous reported sightings in Mexico. While physical descriptions of the creature vary, it is purportedly a large, hairless animal that stands upright like a kangaroo and has a row of spines running down its back. 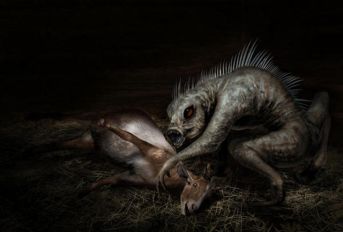 Stories of a reptilian Chupacabra originated in Puerto Rico in 1975 after slaughtered goats and sheep were discovered bled dry, with mysterious teeth marks on their necks.

By the time the creature arrived in Mexico it had undergone something of a transformation. Now more commonly identified as wolf-like, skeptics have suggested that sightings of coyotes or stray dogs keep the legend alive.

A Texas man unintentionally backed this claim when he killed a Chupacabra in 2004. The creature, which had been preying on his livestock, was later identified as a coyote suffering from severe mange.

In Aztec folklore, Chaneques are tiny, forest-dwelling fairies that guard nature and frighten away intruders. In the Nahuatl language their name means the “ones that inhabit dangerous places.” Chaneques are responsible for punishing people who show insufficient respect for the wildlife of the forest. The sprites are capable of causing such terror that people lose their tonalli, (the spirit associated with the day of their birth, roughly equivalent to a soul). Following the theft of their tonalli, victims are required to undergo a magical ritual to avoid certain death. Stories about Chaneques are particularly prevalent in Southern Mexico. While potentially very dangerous, the creatures have a more positive aspect, representing the attitudes of indigenous communities, who use stories of the little creatures to safeguard natural resources and protect the environment.

worshipped by nearby indigenous communities.

Every year in November, a ritual ceremony is held in San Juan Cosala. Worshippers of the goddess put gold and a drop of blood in a miniature clay pot which is cast into the lake to draw positive energy, personal favors or miracles.

Devotees appealed to the female goddess of the lake well before the Spanish arrived in the region. Yet the mermaid is a European concept which was grafted onto the local legend after the conquest. While in European tradition the sea creature was reviled as a vain temptress, lakeside indigenous communities revised the concept and the mermaid became a goddess, miracle worker and provider of sustenance.

A nagual is a sorcerer who can transform themselves into an animal, most commonly a dog, jaguar or puma. This ability can be used for good or evil depending on who exercises it. The individu

al normally takes on an animal form for the night in order to disguise themselves or perform a feat impossible to humans. A person’s birth date often determines whether they are born with this power.

In indigenous communities, those who purport to be naguales often occupy a position of respect and double as curers and seers. Yet in rural mestizo Mexico, naguales are often feared as blood-sucking predators and accusations of nagualism have sparked violence.

Debate rages as to whether nagualism is a pre-Hispanic belief or a European import. While indigenous myths refer to the concept, these were collected by Spanish priests long after the conquest, and some experts argue that it comes from the medieval belief in werewolves.

The ahuizotl, or spiny aquatic creature, is a legendary beast in Aztec myth. The creature is believed to resemble a dog, with fur that forms into spikes. On 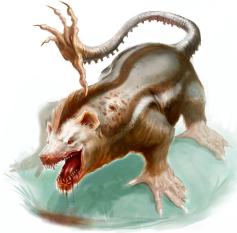 the end of its tail is a monkey or human-like hand which it uses to drag its prey into the water. The creature lives in the watery depths of caves and attracts its prey by wailing like an abandoned baby. Concerned humans follow the cry, fall into the hands of the ahuizotl and are dragged down into the water. When the body is retrieved it appears as before, except the ahuizotl has removed the eyes, teeth and nails.